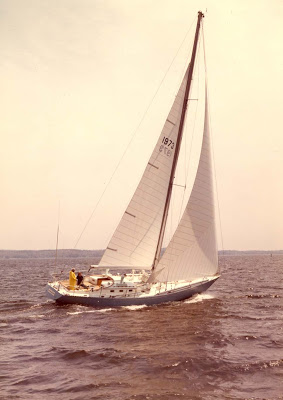 Anjacaa is a 54 foot sloop built in 1973 by Palmer Johnson, and designed by Sparkman and Stephens. She was built in Sturgeon Bay, Wisconsin for Arthur K. Watson. She was built for racing and cruising as Mr. Watson enjoyed racing and his wife Nancy enjoyed cruising. She has a centerboard rig which was designed so that she could get into most Maine harbors at any tide. She was brought from Wisconsin to Camden in 1973 and Camden has remained her home port ever since. She has sailed on countless Monhegan Island races as well as all other GMORC (Gulf of Maine Ocean Racing Circuit) races taking many firsts, second and thirds. She has also been sailed in the Newport to Bermuda race several Halifax races. She has cruised mostly the Maine coast but has sailed as far away as Prince Edward Island. She got the name Anjacaa from Mr. Watson’s daughters names Ann, Jane and Caroline. The last A was for his wife Ann. She has been a fixture in Camden Harbor for the last 43 years.